I’m the type of person who loves to be comfortable. I love knowing the plan. I’m the individual who wakes up in the morning and maps out the day. It’s easy, it’s convenient, and it’s most certainly comfortable.

Last November, I had the amazing opportunity to be a part of the Miss Mary Hardin-Baylor Pageant. One of my best friends, Quinton, and myself were asked to emcee this beautiful UMHB tradition. With this great opportunity, there came a great deal of memorization to go along with it. Quinton and I had to memorize a script for this event, and it seemed as if it were about the same length of the Psalms. Finally, after many weeks, and at least 50 cups of coffee later, we had the script memorized to the point of automation. We knew this script like the back of our hand, and we were comfortable.

Fast forward to the first night of the pageant. Quinton and I were feeling really great about the script, and we were ready to go! The first half of the show went by, and we nailed it. During intermission, Quinton and I decided to run through the second half of the show backstage just to make sure we knew what we were doing. Just like the previous 20 times we ran through it, we absolutely crushed it. We were comfortable.

It was time for the second half of the evening, and Quinton and I were ready to walk on stage. From backstage, we could see the house lights starting to dim. That was our cue. We began walking to center stage, and my worst nightmare became a reality… I forgot my line. This was it. My future in show business became a distant dream of the past. With my legs trembling, I looked to Quinton and said, “I have no idea what my line is.” I was completely uncomfortable.

The following seconds seemed like an eternity to me as I waited for the spotlight to hit us. I could feel the sweat beginning to form on my brow. All I could think was that I was about to become the Steve Harvey of the Miss Mary Hardin-Baylor Pageant. As my nightmare unfolded in my head, I saw Quinton look at me. We made eye contact, and he said, “I got you.” In that moment, I had never been angrier at an individual. I’m thinking that I’m about to become the laughing stock of UMHB, and those are the words he chose? It is safe to say that I had never been more uncomfortable.

Luckily, the good Lord is sovereign. I had forgotten that Quinton had the first line of the second half. Once he said his line, it jogged my memory, and all was well. (Hallelujah!).

And the moral of the story is…

Sometimes in life, we are left in uncertainty. The scary fact that we don’t know what is going to happen turns us away from amazing opportunities. These are the times that God says, “I got you.”

Instead of waiting on God to tell us our step-by-step instructions on how to live life, sometimes we have to be okay with the fact that God has us and desires good for us. Even if all we can hear is a gentle and simple “I got you,” that should be more than enough.

I’m thankful for a God who doesn’t call us to be comfortable, but calls us to okay with being uncomfortable.

Looking for devotionals similar to this post? The McLane College of Business (where Wesley is a student!) publishes a weekly devotional written by their own faculty. Go check out Crucial Connections and read more! 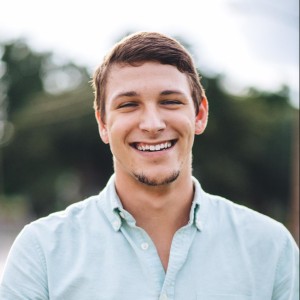 Wesley is a senior Marketing major at UMHB. He serves as the president of Student Foundation and the SGA Senior Class Chaplain, and he has been involved with Easter Pageant, Cru Knights, Miss MHB, and the Youth and College Ministries at Vista Community Church. He likes any and all things Texas Rangers, Ultimate Frisbee, and telling people about how much Jesus loves them.